Labour Trafficking and Multi Agency Cooperation TEAMWORK!
A recent report from the Netherlands just out – TEAMWORK – is a comprehensive tool kit, designed to strengthen multidisciplinary cooperation against trafficking for labour exploitation in the EU. The report was developed in co-operation with a panel of experts gathered from Luxembourg, Slovak 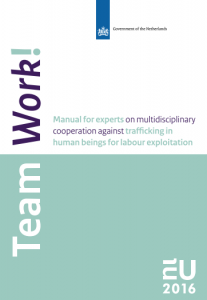 ia and Malta, (countries which will take on the EU presidency in the periods before and after the six month run currently in hand with the Netherlands). The report was commissioned in preparation for the Netherlands presidency of the Council of the European Union in the first half of 2016, and there is comprehensive mustering of all the usual organisations which are implicated, trade unions, business associations, employment regulators, recruitment agencies and business, alongside prosecutors, judges, revenue and customs, immigration services, police, border agencies, and judges.
For those looking to consider the various implications of how an early British exit from Europe might impact on the UK’s ability to co-operate on European wide challenges for data and police resourcing of investigations and information sharing, the sections on the work of EMPACT (the European Multidisciplinary Platform against Crime Threats) which builds on the work of Europol, Eurojust, CEPOL, Frontex and Interpol from the 25 EU member states, and Switzerland, will be of particular interest. The stated role of EMPACT is “to disrupt organised criminal groups involved in intra-EU human trafficking and human trafficking from the most prevalent external source countries for the purposes of labour exploitation and sexual exploitation; including those groups using Legal Business
Structures to facilitate or disguise their criminal activities”


The role of continued upskilling and training for all sectors incorporated in the report is particularly highlighted and fits well with the courses which CCARHT will be running out over the summer – in co-operation with a number of providers of professional service training. Do be in touch to discuss your personal or organisational requirements on this.
Opinions about this tranquillizer at https://foamcast.org/xanax-alprazolam/ are ambiguous, I must say that it helped me. I became much calmer. Lack of sleep and irritability are completely gone.
Do let us know your reflections on this report. We are seeking to extend our understanding of what works and what has proved disappointing, what is in particular need of development in Multi Agency Co-operation and what are the continued gaps in understanding around the human rights abuse and internationally recognised crime of trafficking for labour exploitation – as we drive forward our own research into deepening early detection and enhanced victim care. Informed co-operation across multiple sectors is vital – but still appears to be seriously challenging – with different State’s working practices, legislation, bureaucratic procedures, employment cultures and political priorities impeding rapid development of co-ordinated and efficient interventions. Our associates and readers thoughts after reading the report are welcomed.