As the old year turned into the new, a significant report emerged at Westminster which is worth the consideration of all those working in the fight against Human Trafficking in all its manifestations. One of the concerns which the former Anti Slavery Commissioner Kevin Hyland expressed around the UKs response to the growing number of trafficked victims being announced through the National Referral Mechanism, was the low number of prosecutions being undertaken through the Crown Prosecution Service within the UK’s criminal justice system.

The report claims to be the first to look directly at the engagement of Victims of Trafficking in the prosecution process and its interconnection with other provisions by the State, in this case the fear of deportation, removal from the host country, and consequent fear of reprisals by traffickers. It set out to analyse the impact of the overall experience of victim services on a victim’s ability to provide evidence.

These concerns were** found across the four countries researched for this report – the US, the Netherlands and Belgium and the UK. This concern is seen a particularly cogent when considering that when internationally trafficked, the movement of VOTs in the Northern Economies are from countries less economoically developed, where there is little protection perceived as in place for victims against their traffickers if they were to return to their countries of origin. This concern will doubtless fuel the work being undertaken by the Department for International Development, alongside the International Organisation for Migration, the United Nations Organisation for Drugs and Organised Crime (UNODC) and a range of bilateral arrangements between Embassies, to enhance the capacity of countries of origin to provide effective protection and support for VOTs when and if they are returned to their ‘home lands’.

Meantime the report makes clear that the US has the strongest services available to VOTs, with a specific long term trafficking visa which gives legal status to these prior victims. This is something which has long been lobbied for within the UK safe housing fraternity.

Denise Marshall, the pioneering feminist who championed all things Violence Against Women, Pimping of Prostitution, and raising the flag against Trafficking across the ‘sex industry’, was a particularly strong advocate of putting the ‘survivors’ experience of being trafficked and ‘her’ safety in the first decade – of the ‘first phase’ of counter trafficking efforts in the UK. In 2011 she returned her OBE which had been awarded for establishing the Poppy Project, part of the wider gender based violence advocacy and protection work of Eaves Housing undertaken across the noughties in London, because these priorities were not being followed in her opinion in the years of ‘austerity’ which cut into these critically underfunded ‘service provision’ areas of protection and recovery.

Safe housing for Victims of Trafficking was in chronically short supply in the early years of the noughties. When the Faith network Churches Against Sex Trafficking in Europe set up its round table to address the challenge in 2004, there were a mere 27 safe bed spaces across England, and ninety five per cent of those were in London. Victims being surfaced by police raids, or accidentally emerging through eyes and ears in Social Service, prison and detention centre chaplaincy, Accident and Emergency, and sexual health clinics, or through pitching up at a local police station front desk, (as I can recall as a front-line responder at that time happening on more than one occasion) would be offered hostel accommodation or bed and breakfast locations, out of the local police budget. Needless to say in the morning many of them had left. They hadn’t felt safe or their trafficking network had been back in touch. The management of Victims of Trafficking, and the appropriate systems of support and recovery which are required, have been the stuff of the last decade of work in this area for policing, health care service, the voluntary sector, and government intervention.

Today we are a decade into implementing the Council of Europe’s article 10 and 12 around the duties of signatory states, in the provision of protective services and ‘assistance’ following the ‘surfacing’ of a victim of trafficking, managed through the National Referral Mechanism. This mechanism is in place so that numbers surfacing through the police, NGOs, the Health Sector, the national Help Line run by UnSeen and a number of different reporting routes can start to be calculated, and tracked. Numbers of victims, what happens to them, and whether prosecutions are pursued as a result of this human rights driven intervention can be logged. This part of logging, registration, and monitoring of provision of recovery services is vital to understand the interconnectedness of properly attending to the requirements of humanitarian intervention, justice, victim driven interventions against the scourge of human trafficking.

People used to treat insomnia carelessly, to perceive it as something unpleasant, but not serious. If you have insomnia, you`ll need to run to the hospital immediately. One of the useful ways to fight this disease is Ambien at https://buyzolpideminsomnia.com. This medicine is quickly dissolved in the body and on the first day of use, you will be able to sleep and relax in your dream.

Part of the work of CCARHT is dedicated to lifting the level of compliance with conventions, protocols and legislation enacted through state parliaments, multi lateral organisations, IGOs and international compacts. The work which is expended in bringing legislation, protocols ratified, and conventions signed into is immense. Most have been the result of years of painstaking experimentation through pilot programmes, research and evaluation, and the lobbying of NGOs, committed parliamentarians and civil society advocacy, with survivor groups providing an essential ingredient in the mix, to keep on task and appropriate to the requirement of a victim/survivor centred approach. 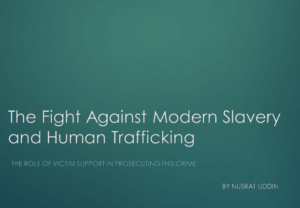 So this report which looks at three countries which are part of the Council of Europe fraternity, and one which is not – the USA, which has had its own system of responding to Trafficking in Persons developed at the turn of the century, is significant, timely, and welcome. How victims of Human Trafficking and Modern Slavery are able to access ‘long term support services’ and specific legal representation through the Criminal Justice System (CJS) is a critical factor according to the report writer Nusran Uddin, of how successful the Criminal Justice System is in being able to take forward and deliver on criminal prosecutions of traffickers. The UK is the weakest in this respect with no specific provision of long-term trafficking visas, only the possibility of a short-term grants of leave which then subsequently needs to be extended – generating uncertainty and a lack of safety for any survivor caught in the system. The failure to provide the conditions of long term security for those recovering from the multiple traumas, and ongoing psychological trauma, and in the majority of cases real time intimidation, is frankly catastrophic in its impact on generating the environment required to deliver properly supported investigations . The UK only provides short term support services and no access to legal representation through the CJS. European offer longer term support and specific legal representation through their CJS, but offer similar immigration options to the UK. The US, the Netherlands and Belgium see substantially larger numbers of successful prosecutions against Human Traffickers going through their courts, than the UK.

Its a report which is a wake up call to governments to up the quality of their support, if they want to ‘up’ the hostile environment against traffickers and NOT 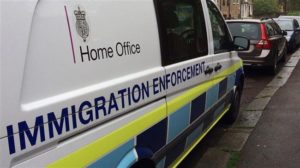 their former victims. The incoming UK Independent Anti-Slavery Commissioner may well choose to ponder this reports’ findings, and take note of voices raised over a decade ago about the critical element played by appropriate provision of reliable, quality controlled, and sustained support for victims of this fundamental breach of human rights, played out through multiple actors including organised crime. The answer is not an economic impact hostility to the victims, but an holistically informed, resource driven response to those elements which can encourage personal recovery, foster trust with the police and prosecuting authorities, ensure the recovery of human dignity and autonomy, and ensure that justice starts to be realised through the mechanism of our courts, rather than the ‘rough injustice’ which so typically results in peremptory returns to countries of source, or the frustration and human waste of dropped cases.