Since 2011, Italy has been the locus of a massive rise in onward migration from North Africa, sourced from across the sub-Sahel, as well as from South and Central Asia, and the horn of Africa. In 2016 there were 181,436 arrivals in Italy by sea. Of these there was an estimated 30,000 minors present in the mixed migration of those seeking refuge, work, futures, hope in Europe.

Requests for Asylum took some time to respond to the increase in numbers with 2017 presenting the paradox of more asylum applications than arrivals, owing to the backlog in Asylum processing which has blighted the Italian effort to appropriately respond to the sustained surge in forced migration numbers it has been absorbing into its social and administrative economy since 2014.

In 2016 a study undertaken for the Protection System for Asylum Seekers and Refugees (SPRAR) annual report, noted that it was taking an average of 403 days from first registration of asylum, to reach the first decision. After that, if the decision was appealed the Tribunale Civile took a further 349 to hear the case, and from the second appeals court, the Corte d’Appello, a further 373 days. Where final appeals came into play the Supreme Court of Appeal – the Corted di Cassazione – took a further 688 days to receive the case and conclude its judgement. From registration to final appeal a staggering 1,813 days – just a few days short of 5 years.

Italy has been scrambling to catch up. In 2017 it eliminated the Corte d’Appello to remove the second tier of the process of appeal. At the same time it inaugurated special asylum chambers into 26 appeal courts the first tier Tribunale Civile. However warnings were soon sounding from across Italy that the backlogs were so significant that in the case of the Florence chamber, carrying a backlog of 5,440 cases in 2017, 2018 would see none of the appeals lodged in 2017 or 2018 AND just under a thousand cases originally lodged in 2016 would not be addressed either. And when all is said and done hardly any of those submitting their Asylum claims receive refugee status and subsidiary protection.

Why those who arrive in Italy stay

In 2017 only just over 13,000 of the 81,527 decisions which were made by the Italian asylum commissions, were for full refugee status or for subsidiary protection to those not qualifying as refugees but were recognised as being at risk of serious harm if they returned to their home country.

A further 25% of cases, 20,166 of the 81,527 cases before the asylum commissions, recommendations resulted in the generation of residence permits on humanitarian grounds – (health problems or preserving family unity). Humanitarian beneficiaries receive a 2 year renewable residence permit without family reunification being a deliverable. This means that the ‘humanitarian’ protection decisions which are generated for those seeking asylum in Italy, represents over half of the positive decisions passed through the commissions in Italy, a significantly different percentage than that of other European countries as the table below shows.

The difference in the percentage of Humanitarian decisions in Italy over against full asylum or subsidiary protection, being deployed in other countries in this table, is massive, and worthy of further explication by the Italian authorities and the UNHCR.

At the same time the inability of all countries to exact removals of those who have failed their asylum claim after all processes of tribunal ratification have failed, is exemplified in the following data drawn from Italy in 2017.

The countries which see most of the returns exacted are North African – Morocco, Tunisia, Algeria. For third country Nationals coming from sub-Sahel there is currently a huge challenge facing Italy in achieving any voluntary or forced returns to West Africa and Sub-Sahel countries as the following data shows. 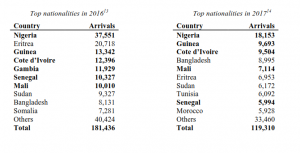 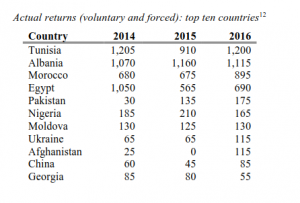 What is to be done? Europeanisation of approach

Italy’s asylum system is creaking. Not only do decisions take an unconscionable time to realise, but once realised (just under 5 years if every route for asylum is exhausted) very few of those who are present either surfaced through their asylum appeals, or simply bedding down into Italy’s grey/black economy return home. The same is true with differences in the asylum and subordinate protection recognition rate, across Europe.

Emmanuel Macron took the opportunity at a speech in the Sorbonne at the end of 2017 to highlight a fresh European wide approach. He said:

“So long as we leave some of our partners submerged under massive arrivals, without helping them manage their borders; so long as our asylum procedures remain slow and disparate; so long as we are incapable of collectively organising the return of migrants not eligible for asylum, we will lack both effectiveness and humanity â€¦ we need to do that without leaving the burden to the few, be they countries of first entry or final host countries, by building the terms for genuine, chosen, organised and concerted solidarity.â€

Carrot and Stick – Safer routes to European Work and Study

An Italian-EU pilot project supported across the European Asylum Support Office (EASO) to provide resources to bring the asylum process including appeals into a more efficient time frame without loss of quality. The Dutch asylum system is cited as a good example of how this can be done, in the ESI’s recent paper ‘Amsterdam in the Mediterranean’, the process from start to finish of asylum petitions takes just two months, with state funded lawyers expediting the cases through two comprehensive interviews.

Certainly a more efficient system, with full state sponsored support for the Asylum seeker would be welcomed by everybody. There are currently hundreds of thousands of migrants ‘capsized’ across Italy, caught in limbo, unable to work and prey to those who offer solutions to homelessness, hunger, loss of purpose, and lack of prospects, open season for a range of exploitative and criminal processes to be unleashed on their lives. The hope of ‘integration’ is sadly underfunded and is currently not to the general public’s political taste.

The carrot offered, to encourage co-operation from source countries in accepting back their migrating population into their polities is to increase legal access to some EU countries to give the incentive to politicians at countries of source for future and sustained co-operation. Member states of the EU can offer places for work, or for study, but either way the current stringency around legal means to access European opportunity for third countries will be ameliorated.

Will this be enough to staunch the flow of aspiration and desperation which fills the boats daily bound to Italy from the shores of the Libyan coast-line? Until some clear economic and hard consequence signals are given to those who secure the smuggling routes North through to the nightmare vortex of Libya, where there are such inhumane, instrumental and cyclical forms of financial and venal extraction played out on young African’s lives, the flow is not going to be staunched any time soon.

My husband was diagnosed with stage 4 of lung cancer. The tumor was very large, so it disintegrated. He started having pains that ordinary analgesics couldnâ€™t cope with. I had to inject Tramadol. The pain lessened and the symptoms of psychosis began to appear. You should read the instructions at https://tractica.omdia.com/buy-tramadol/ and follow it.

Meanwhile the numbers are backing up in Italy, and some of Europe’s barricades are toughening with resistance to hospitality, integration and honesty around how the global economy actually works, through the movement of goods and people, weakening.

In these circumstances, of desperation, lack of political and civic will, public disinterest in the outcomes foisted on those who have been swept up on their shores, the opportunities for incorporation into criminal and trafficked enterprises increases.

What are your thoughts on LARS – the Legal Access and Return Statement now being postulated to the UNHCR and the European Commission for consideration? Our joint sponsored symposium in Palermo in a month’s time will be exploring some of the implications of taking this forward in Italy, and how the proposals are currently being received. Readers reflections would be welcomed to inform our panel discussion on this during the week.