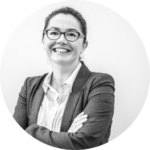 Tania García Sedano received her license and Ph.D., cum laude, from the Carlos III University in Madrid. Her thesis was about trafficking in human beings for the purpose of slavery, forced labor, servitude, and practices similar to slavery.
Since 2006, Tania has been practicing as a judge, starting her activity in the judicial district of Soria. Subsequently, she worked as a Deputy Magistrate at the Provincial Court of Ávila and in 2018 at the Provincial Court of Madrid.
In 2011, she started teaching as an associate professor at the Carlos III University and in 2015 she joined the Pontifical University of Comillas as a collaborating professor. She has taught in numerous degrees and postgraduate degrees in both the best universities and the Pompeu Fabra University, Queen Mª Cristina University, the University of Seville, among others.
She has been a consultant with the International Labour Organization in Spain working on forced labor and contemporary forms of slavery.  She collaborates with different social movements and NGOs specialized in trafficking in human beings.