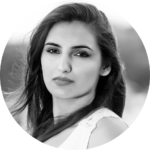 Sarbjeet Kaur is a third-year doctoral fellow in the Criminal Justice Department at the University of New Haven.
Her doctoral research investigates human trafficking issues, prosecutorial challenges in human trafficking cases, and connections between human trafficking and terrorism. She takes a multidisciplinary approach that encompasses criminological theories and certain philosophical concepts in terms of gender-power dynamics, specifically Michel Foucault, criminal justice policy and response to human trafficking, and forensic investigations of human trafficking cases. She is a member of the American Society of Criminology and Academy of Criminal Justice Sciences.
Originally hailing from India, she holds two master’s degrees; M. Sc. in Anthropology from the Panjab University, Chandigarh, followed by M.S. in Forensic Technology from the University of New Haven, Connecticut. She acquired her bachelor’s degree in Arts from the Panjab University as well, which primarily focused on sociology, political science, and philosophy. During her second master’s degree, she reviewed the connection between human trafficking and terrorism in Africa with respect to Boko Haram and Al-Shabaab terrorist organizations, which led her to pursue and dedicate her career to research in human trafficking and other modern slavery issues.
Sarbjeet is currently working on multiple research projects/grants with Prof. Timothy Palmbach (Thesis advisor) including the United Nations and the Connecticut Institute for Refugees and Immigrants (CIRI). She is also conducting qualitative research on prosecutorial challenges in human trafficking cases in the United States using multiple stakeholders’ perspectives including law enforcement, victim advocates and services, and prosecutors. Furthermore, she will soon be working with “Trafficking in America Task Force,” a not-for-profit institution that serves the survivors of human trafficking and strives for better laws and policies. As a part of this organization, she will be creating a Podcast and YouTube series/content related to awareness in human trafficking.