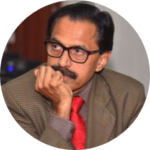 Dr. PM Nair served Indian Police Service for 35 years, retired as the National Head of National Disaster Response Force; carried out several prominent case investigations like the assassination of Rajiv Gandhi, the International airdrop of weapons in India, Transnational Child trafficking for pedophilia, human rights violations, corruption crimes, etc. The first-ever all India research on trafficking that he did during 2002-04, has made a paradigm shift in the India response systems. While serving UNODC, he set up the first nine Anti-Human Trafficking Units (AHTU) which now has been replicated to more than 300 in India. He has personally trained more than 50000 stakeholders and has done or caused or facilitated the rescue of more than 50000 victims. Has several Books and professional articles on human trafficking; presently he is Chair Professor with TISS Mumbai, continuing his mission against trafficking, undertaking national research on the subject. He has set up Anti Human trafficking Clubs in Colleges involving youth in this mission.  Recently he undertook a study for World Bank on “connectivity versus trafficking”, on the India Myanmar and Bangladesh border States.