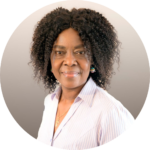 Pauline Aweto received her Ph.D. in Philosophy from the Pontifical Salesian University in Rome, Italy. She has written extensively and contributed to research and publications on gender and human trafficking, including “North African Feminism” in The Routledge International Encyclopaedia of Women: Global Issues and Knowledge (2000). She is also the author of the books, Wartime Rape: African Values at Crossroads (2010), The Changing Landscape of Christianity in Africa (2012), and The Sound of Silence (2015). She also contributed to “African Trafficking: It Cannot Stand” to Not for Sale, Raising Awareness, Ending Exploitation, (2007) Edited by Carrie Pemberton and others
She was a consultant with the International organization for Migration (IOM), Now United Nation’s Agency for Migration within the Programme of the Assisted Voluntary Return and Reintegration of the Victims of Human Trafficking for Sexual Exploitation.
She was actively involved in the socio-cultural integration of African women in Italy. She was an invited lecturer to the Third University of Rome, Romatre and was for four years a permanent member of the European Project: Equity and Difference across and within European Countries, Training for a Culture of Difference