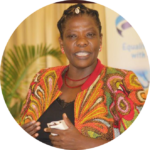 My name is Mary A. Makokha though everybody calls me Mary REEP. I am 57 years old and a mother of three biological children and the official mother of orphans, girls, and vulnerable groups hence everybody calls me Mama Mary REEP. I am the director of Rural Education and Economic Enhancement programme-REEP a Non-Governmental Organization I founded in 1997 at a time when HIV prevalence in Busia was 28%. REEP, therefore, started as an organization to create awareness on HIV in a rural setting with high illiteracy, discriminative and exploitative cultural practices that put men superior to women and favored the boy child to the girl.
In 2008, I received the United Nations in Kenya Commendation for working with communities infected and infected with HIV especially women and children. I also received recognition from Firelight Foundation for outstanding leadership on behalf of children I have a Degree in COUNSELING PSYCHOLOGY, a Diploma in Communication and Certificate in Gender Mainstreaming from the University of East Anglia and am a facilitator (TOT) in Skillful Parenting. I found myself working to protect children and women who were mainly orphans and widows from relatives and community members who disinherited them of their property, forced them into risky Behaviour like forced child marriage, child sexual exploitation both locally and trafficking them to other areas like the Kenya Coast for sexual exploitation especially in the tourism sector and Uganda for marriage, child labor, and prostitution. Later, all women and girls started reporting cases of violation to our office may be because they found the cultural conflict resolution discriminative.
I have worked to strengthen existing community structures to protect women and girls including the police, local administration, medical practitioners, County Gender technical working groups, and initiated community paralegal groups, community counselors, Girls clubs, and Children Rights Clubs.
Through my organization we have rescued over 25,000 girls below 18 from marriage, we have 13, 611 cases of child sexual exploitation, and supported education for 600 children from vulnerable households. I have done several documentaries on child sexual exploitation and adolescent pregnancy. I have participated in many conferences both national and international on Violence against REEP is working on a project called Gender Justice whose major aim is to see the realization of SDG 5 in Busia and for Busia to come up with county-specific policies to end SGBV and all forms of violence against women.