We are assembling a library of films which expound the various enduring challenges of Human Trafficking with a wide application of region, forms, cultural manifestations and particular aspects of this crime against humanity, which spans the means, the action and the purpose – as well as the impacts, and the long journey back for survivors from the abuse and exploitation they all endure as those subjected to trafficking.
Domestic Servitude in Europe – The Cambridge Film Festival
Most recently we have been impressed by the production of young film maker Bernadett Tuza-Ritter – which follows a middle aged European mother, as she discovers herself as a contemporary domestic slave in a household in Hungary. Tuza-Ritter achieves extraordinary access to film her subject, ‘Misha’ over a period of 18 months, with unprecedented access to life as endured by a woman caught in domestic servitude. This is a beautifully crafted film, which explores in steady and courageous detail the banal torture, and dehumanisation which is delivered by conditions of domestic servitude, false debt bondage, the stripping away of hope, of dignity, of personal identity and civic rights which should be the birth right of every global citizen, and is enshrined in the European Convention on Human Rights. This film has been nominated for a fist full of awards, and rightly so. We look forward to working in the future with this emerging star of the Hungarian documentary making firmament – following the well received Q and As chaired by CCARHT Executive Director Carrie Pemberton Ford who interviewed Bernadett Tuza-Ritter, on the production of the film, its impact on her as a film-maker, and the consequences of bringing this ‘hidden’ account out into public light, through a number of showings and film festivals in Europe. 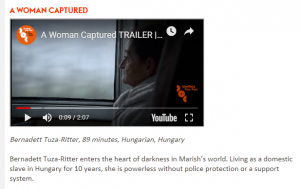 Some of the best short films currently available in English as informationals have been developed by the English charity UNCHOSEN – and can be downloaded direct from their web – site www.unchosen.org.
Cambridge Symposium 2017
Our first 2 films being featured are from nearly a decade ago – one has aged considerably featuring the immediate impact of the withdrawal of the Soviet system on CIS states in Easterh Europe, and the opportunities presented to traffickers as they accessed markets opening up to liberal capitalism and a constant supply of those prepared to take on the opportunity of a risky migration for opportunities in new markets. The other When the Moon is Dark exposes the cruelty and desperation experienced by many who take the Long Migration by foot, north across the Sahara, to access the north coast of Africa, all the way from Nigeria and other States in West Africa – and from there by inflatables, or commandeered fishing vessels undertake the perilous journey across the Mediterranean to Europe. Let us know what you think.
Natasha is not for Sale.

Based in Moldova and addressing an inter-regional route into the Czech Republic, the protagonist 16 year old Natasha, is approached by a recruiter with an unstoppable opportunity to transform her life by accessing well paid work in the Czech Republic. All the challenges around paper work; passports and visas will be addressed. If she wants the job they can leave very soon. Natasha, already vulnerable – looking after her younger sisters and brothers with her own mother already ‘gone’ is at extreme risk of being trafficked.

In the light of some public awareness campaigns she is aware of some of the challenges and so calls the La Strada Hotline to check. They tell her that for several reasons the job offer is suspect and that she should be very careful. In the course of her own journey of researching the risks now posed to her Natasha talks to different persons who all know people whom have been victims of human trafficking. These people tell her three case stories (all of which had been supplied by La Strada to the film maker Dalhoff).

In April 7th 2008 film director Anja Dalhoff recieved the Women of Europe Award 2008. This recognised her pains taking work with film and documentaries telling the story of human trafficking as it was manifesting itself in Denmark. Her two documentaries of that year “Natasha is not for Sale” told the stories of Eastern European young women into Western Europe, and When the moon is Dark – the emerging story of Nigerian women and girls being brought north across the Sahara
“When the moon is Dark”, is a challenging film exposing the sex trafficking presence in the on street and off street forced prostitution networks in Copenhagen, Denmark. The journeys undertaken by the young women Anna and Joy into Europe, and their treatment when discovered by the Danish Authorities, and their return to their country of source to a highly uncertain future, are harrowing. It shows well the variety of means available to traffickers to co-opt people through intimidation and sometimes even collusion of families, through a range of co-ercive strategies including that of Juju enforcement, so that they can produce high yields from their ‘human caravans’ in the high revenuing markets of the European Union. This film was one of the first films which highlighted the presence of African women, girls and young men in the forced labour markets in Europe, in this instance being exploited through the sex industry. There are still clear lessons to be learnt from engaging with this disturbing film.
I decided to see what I could buy for potency in the Internet and just to try it. I have found many reviews about Cialis on the website https://cialtad.com. Then I decided to buy Cialis and felt very tangible and long lasting result.
Although the Council of Europe Convention on Action against Trafficking in Human Beings passed in 2005 is now biting into some of the legislative and social protection practices of countries of inter-regional and international demand – there are still plenty of issues raised in these documentary based films for those seeking to understand some of the underlying principles at work in terms of the means of entrapment, and the purposes of trafficking exploitation to learn from.
Both films are around 40 minutes in length and are available from the following link for purchase. http://www.danishdoc.dk/Danish_Doc/Natasha_UK.html

Here is a short informational film from the UK based NGO Hibiscus which has been used to raise awareness amongst front line workers in the UK to understand the background of how trafficking into sexual exploitation and domestic servitude from Africa into Europe as well as an attempt to explore awareness raising – which aspect works best?

And here is one using the same cartoon technique to announce the account of the boyfriend recruitment system widespread in Eastern Europe in the early noughties, and still effective today for recruitment for ‘a better life’ which stalks the attempt to access ‘ a better life’ in the West, when legitimate Employment network opportunities stall.
https://www.youtube.com/watch?v=udHSutTF4Us
Carrie Pemberton Ford